I look at property every day; have done since property was first put on the innerwebs all those years ago. I hate that the listings slow down so much over the Christmas holidays. Bugger it, I actually hate that Sunday is a no listing day. The downside of this is that a lot of the properties start to look the same and meld into one big pile of boring beige.

This next property is definitely NOT beige.

This property is located just opposite the Spofforth Street shops at Cremorne so I'm well aware of it and have always been curious about it. I'd hoped that the inside would match the promise of the outside for and the reality does not disappoint. (click pictures to enlarge) 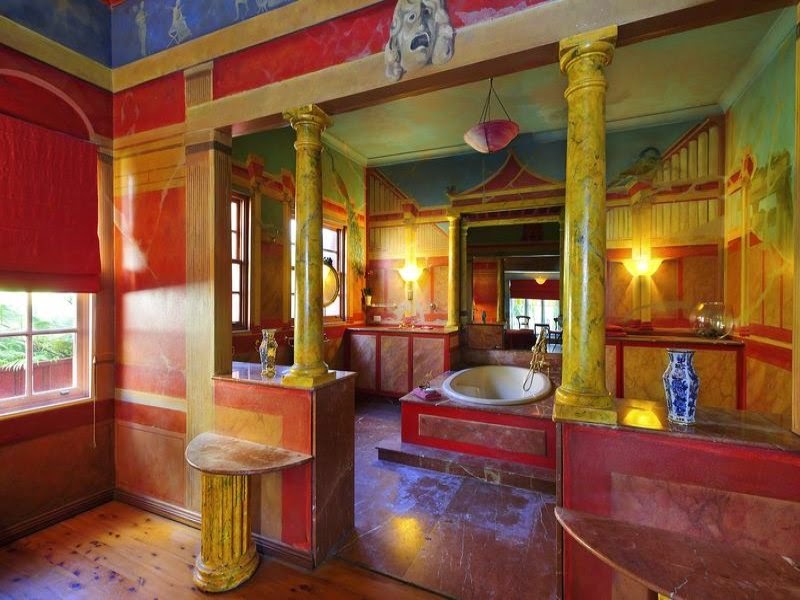 Ensuite. It's open to the bedroom and there's no separate room for the loo. Potential to be woken up to delightful sounds and aromas. I'll pass thanks. But still, it looks really cool. In the same way that an abandoned amusement park looks cool. 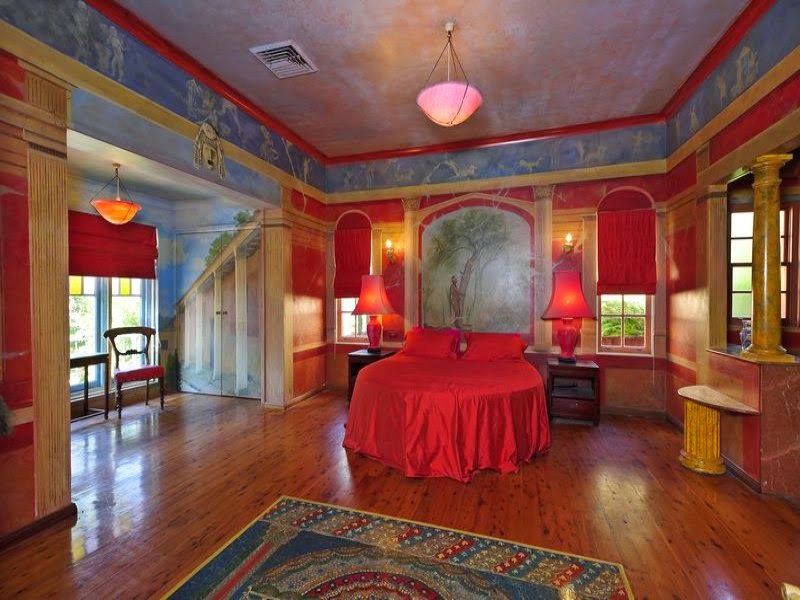 No, I don't think I could live in it for long like this either but isn't it cool? Bit faded but seriously awesome. 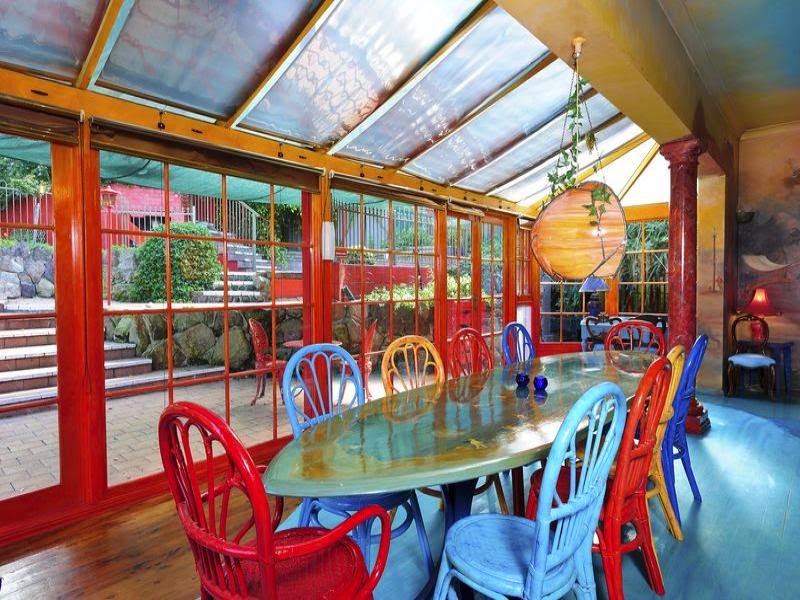 I love the chairs. 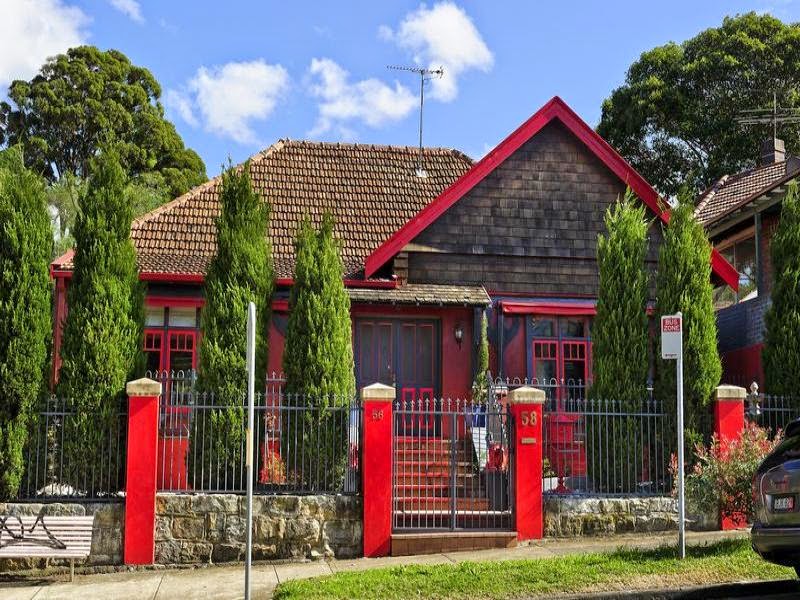 I love the red. Always have. 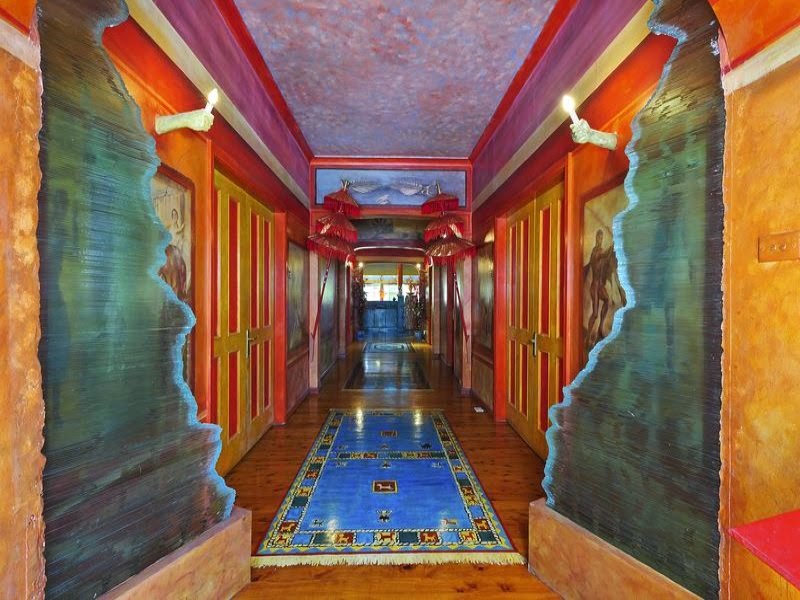 It's almost awesome but the rugs kill it for me. And the weird broken glass doors. 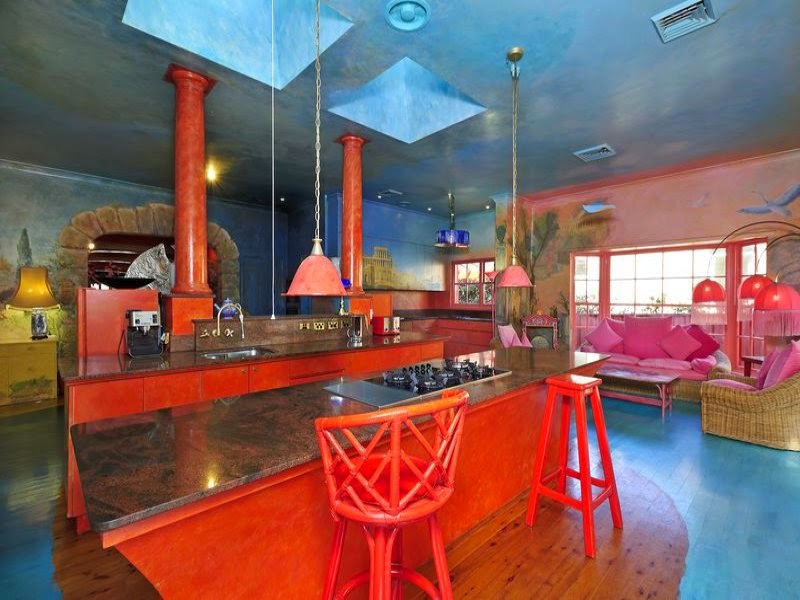 Kitchen etc. You know what this place is like? It's like what a house would look like if you asked a 5 year old to draw their perfect house with crayons. And that's not necessarily a bad thing, we just need to bring it back a bit.

This property is being marketed for sale by David Murphy of David Murphy Real Estate. He can be contacted on 0425 312 481 if you would like further information.

UPDATE: I got curious and did some research on the house. Turns out it was owned by a gentleman by the name of George Hayim who recently passed away at the age of  90.

KNOWN as the “duchess of Cremorne”, George Hayim lived and died by his own rules, close friends say. The openly gay man was a colourful Mosman identity, who called his lurid red house on Spofforth St home for about 30 years. He died last Tuesday, January 2, aged 90.

Mr Hayim’s long-term carer, Karen Lindley, said he died in his bed, listening to Maria Callas, with his beloved great dane, Pushkin.“He had no regrets, he died exactly as he wanted to,” Ms Lindley said. “He was flamboyant and eccentric and very wilful, but he was the most generous man.”

Born in Shanghai in 1920 to millionaire parents - a Russian mother and Iraqi-Jewish father - Hayim enjoyed an opulent and privileged upbringing. He studied at English private boys school Harrow before serving in the navy during World War II. Mr Hayim never worked a day in his life but instead travelled the world, pursuing his love of the arts. “He used to spend seven months in Sydney, three months in Paris and three months in his London apartment,” Ms Lindley said. He was fluent in seven languages and could sing along with operas.
He would often wander the streets of Mosman in his pyjamas or underpants.

A devoted fan of film and theatre, Mr Hayim was seen at Cremorne Orpheum three times a week for decades. ``He was a meddler with a fabulous sense of humour,’’ Ms Lindley said. ``Although he was gay he preferred the company of men with girlfriends.’‘

Mr Hayim also published two books - Obsession (1971), about his passionate love-affair with a young Arab living in France, and Thou Shalt Not Uncover Thy Mother’s Nakedness (1988), an autobiography.

Mr Hayim’s last wish was that he have no funeral service but his body be donated to the University of Sydney for the purposes of science.