Remember this gorgeous place at Rose Bay which I posted about on September 18th? About which I said " I also suspect this place will sell quickly as the listing also says the house comes complete with a mooring for a large cruiser and this mooring is one of only 2 of this type in Rose Bay." 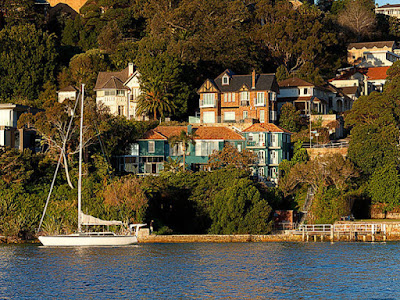 THE Rose Bay home of the late arts philanthropist Ann Lewis AO sold for $15 million this week. Amaroo, the harbourside reserve property, was offered for sale at an invitation-only auction through McGrath agent Andrew Livingston and Christie's agent Ken Jacobs. Three parties registered to bid for Amaroo but only one bid, of $10 million, was forthcoming during the auction and the property was passed in. Immediately afterwards, the agents entered into protracted negotiations with the bidder.

After two hours, a price agreement was reached with Lewis's four children who had offered the property for sale following their mother's death in May. At the foot of Bayview Hill Road, a steep cul-de-sac sandwiched between Kambala and Kincoppal-Rose Bay schools, the property has three storeys, a private jetty and a boat pen.

Last traded 55 years ago, the home has six bedrooms and formal and casual living areas, each with uninterrupted views to the Harbour Bridge. The Bayview Hill Road price record stands at $18.2 million for the 2006 sale of a four-bedroom home a few doors from Amaroo.

One of Australia's best regarded collectors and arts supporters, Lewis was the wife of the late John Lewis, chairman of Concrete Constructions which built Centrepoint Tower and also worked on the new Parliament House in Canberra. During her last years, Dr Lewis gave away much of her large and valuable art collection, including dozens of artworks worth millions of dollars, to the Museum of Contemporary Art. Sixty works, including a large John Olsen painting that hung in her dining room for 45 years, were donated to the Newcastle Region Art Gallery. A collection of more than 400 artworks and antiques will be auctioned on November 7 at the Art Gallery of NSW by Mossgreen Auctions.